“What kind of LSD, although possibly addictive, is not harmful to your health?”  The answer is: “When LSD is short for Leafy Sea Dragon (Phycodurus eques), a very rare member of the seahorse family (Syngnatidae) that lives only in the temperate waters of the south coast of Western Australia and South Australia.” These beautiful but illusive creatures thrive where water temperatures range from 12°C to 20°C, and plants rather than hard corals populate the undersea environment.  I was privileged to find and photograph this incredible creature and its “cousin” the Weedy Sea Dragon while staying at Jim and Josie Thiselton’s dive school on Kangaroo Island (KI), south of Adelaide, South Australia’s biggest city. 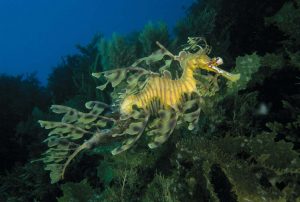 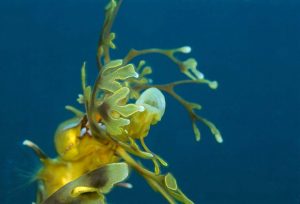 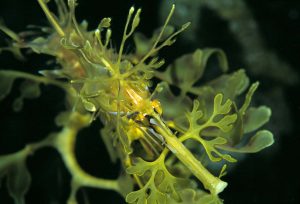 Many divers have heard about the LSD, but few have ever seen one in the wild.  It has leaf-like appendages on its snout, head and body, and it is extremely well camouflaged among the algae and seaweed. Once, while focussing on the eggs of a male LSD, I was distracted by a young sea lion which looked straight into the port of my camera housing.  When I looked for the LSD after just a few seconds, I could not find it for several minutes, although it was in exactly the same spot. The LSD is approximately 40 centimeters (16 inches) long. The body is greenish-yellow with white bars, bordered with dull red and the head has distinct white markings which make it a bit easier to see. 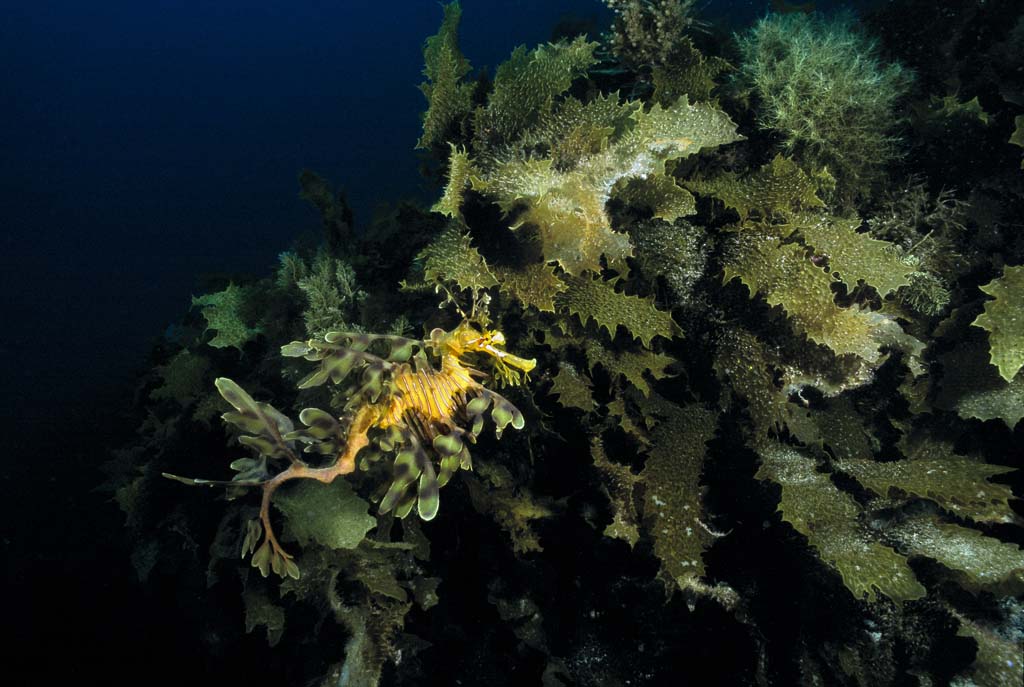 Jim Thiselton is one of the few practical LSD experts in South Australia. He and Josie have operated Kangaroo Island Diving Safaris since February 1991.  Jim visits his LSD friends frequently and carefully documents important details such as changes in behaviour, a pregnant female, or a male carrying eggs. Jim recognises most of “his” LSD’s immediately and even names some of them.  He guarantees his divers that he will find an LSD within two days, or provide a complimentary two days of diving.  True to form, it took him exactly 20 minutes on my first dive to locate my first LSD ever!  Although I knew what this extraordinary fish looks like, I was totally amazed to see it live in its natural environment.  This beautiful fish looks totally different from other seahorses, except for the Weedy Sea Dragon (Phyllopteryx taeniolatus), which also can be found in these same waters.

Finding the LSD, while difficult, is much easier than taking its picture. These fish, like most seahorses, habitually turn their heads away from the camera as soon as you get within shooting range. Therefore, the photographer needs to stay with the fish for as long as possible, without moving or blowing too many bubbles. Usually the dragon will relax after 20-30 minutes and will start feeding on tiny mysid shrimp or “sea-lice”. The feeding action consists of fast forward or downward movements of the head. Only when it is eating is it possible to take pictures. Having learned how this fish behaves, the photographer can better anticipate its movements. Patience will be rewarded with unusual shots of this most remarkable creature.

I began using a 20 mm lens, to capture the LSD in its environment of algae and weeds (pict. 4). Unlike coral reefs, which are primarily animal communities, the undersea world in temperate waters is filled with plants. In South Australian waters, more than 2000 species of plants have been identified! (pict. 5).

After two days using the 20 mm lens, I turned to the 28-70 mm lens for close-ups (pict. 6, 7 en 8). Finally, after a week I felt that I understood LSD behaviour well enough to begin macro photography using my favorite (105 mm) lens.  The female lays between 100 and 350 eggs and attaches them onto a “brood patch” on the underside of the male’s tail, where they are fertilized. This “brood patch” consists of small cups that the male develops during the breeding season from August to March, each cup containing one egg which receives oxygen through the cups’ blood vessels. Algae usually grow on the eggs, further camouflaging them. This is necessary because the eggs are a delicacy for many fish (pict. 9 en 10). The male carries the eggs for a period of 47 to 50 days, until the mini sea dragons emerge.   While I was using the 105 mm lens, Jim found a male LSD with eggs.  Although many of the babies had already left, leaving empty cups, a few embryos were still inside, fighting their way out. I was able to take some pictures in which the almost born babies can clearly be seen (pict. 11). Aquarium observations show that for the first two or three days the babies are sustained by their yolk sac, then they must hunt small zooplankton. Unfortunately, most LSD babies are soon eaten by other fish.  It is estimated that only 1-2% survive to maturity in the wild.

Jim also managed to find some Weedy Sea Dragons (WSD) for me. They, like the LSD, are totally different from other seahorses, with amazingly beautiful colors. They resemble the LSD in both size and behavior. Most of the “Weedies” we found were egg carrying males (pict. 12-14).

The sea grass and seaweed areas of Western Australia and South Australia are under increasing threat from pollution, excessive fertiliser run-off, and poaching. Although sea dragons are “protected” under most states’ fisheries legislation, unscrupulous “collectors” catch many of these beautiful creatures for sale to private aquarium owners at exorbitant prices! Many sea dragons die on their way up to the surface, because they can’t decompress! There is, in addition, virtually no information on population size and the legal and illegal take which makes sensible management of these fish virtually impossible (Tony Flaherty, 1996). The pressure for international trade in seahorses and pipefish for the aquarium and Asian “medicine” trade is expanding (Vincent 1996).

To get to KI one can take a short direct flight from Adelaide to Kingscote on KI, or an often rough ferry ride from Cape Jervis, which is an hour and a half drive south of Adelaide.  The cost is about the same, but one needs transportation to and from the two airports.  With advance notice, Jim and Josie usually pick up their visitors, since the dive school is in fact a farm, difficult to find. A blue and white dive flag and the name TELHAWK (pict. 1 – small photo), tells one that this is the correct address and the gateway to the mysterious LSD.

The Diving Safaris boat is a graceful 15-meter, twin-engine catamaran, which they keep anchored in a protected man-made harbour, half an hour’s scenic drive through a beautiful landscape of century old grass-trees ( Yakka or Xanathias Xanathias) and artistic gum (eucalyptus) trees (pict. 2&3). Although the boat can accommodate 12 persons, Jim never takes more than six divers on safari. There are four spacious cabins, one bathroom with hot water shower, and a fully equipped kitchen.

The dive schedule is tailored to the guest’s needs and abilities.  Some days we went out in the early morning, did two dives and came back around five o’clock in the afternoon.  Other times, we did a four-day dive safari, which had the advantage of staying on board overnight.  On those days we did three dives a day and one night dive as well.  Visibility varied between 10 and 15 meters and there was usually a light current.  The surge can be quite strong, presenting challenges to the photographer.  Because of the cold water, an 8 mm wetsuit, or if possible a drysuit, is recommended.

For the adventurous diver/underwater photographer, Kangaroo Island offers a unique opportunity to see and photograph these unusual and beautiful sea dragons in their natural habitat. With Jim and Josie as perfect hosts and Gum Valley Retreat as a wonderful guesthouse, your stay on Kangaroo Island will be an unforgettable one. I would highly recommend to stay another week on land to experience many of the wonders that KI has to offer, like the wildlife (kangaroos, wallabies, possums,

On April 11 2000, the Minister for Environment and Heritage, Iain Evans MP, announced that the Leafy Seadragon would become South Australia’s marine emblem!

operating in KI waters from November to early May each season.

Live aboard or land based tours available.

Gum Valley Retreat is a 4 star rated accommodation facility for up to 16 guests situated on a 2000 acre sheep and cattle grazing property on the North Coast of Kangaroo Island. The area abounds with local native wildlife, is a five minutes drive from KI Diving Safaris, close to the National Parks and overlooks the sea. 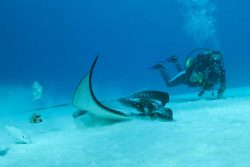